Glendale, California, February 1, 2010- The Armenia School Foundation (ASF USA), a non profit organization dedicated to refurnishing schools in Armenia and Karabagh, hosted an intimate cocktail reception on January 24th, at Ararat Center in Glendale. At the commencement of the reception, Armen Abrahamian, chairman of the board, announced the completion of six more school projects in 2009.

A generous donation by Mr. & Mrs. Onnik and Mariette Muradian sponsored the delivery of new furniture to Mergastan and Baghramyan village schools in Armavir. A group of ASF supporters sponsored the delivery of new sets to schools in the villages of Vanand and Aygeshad in Armavir, and villages of Katnaghbyur and Tsilqar in Aragatsotn regions. A total of 411 brand new student two-chair/ desk sets and 58 teacher desk/chair sets were delivered to all six schools.

“Similar to many other nonprofit organizations, ASF was also impacted by the global economic crisis but we still were able to complete six school projects in 2009. Thanks to our supporters, we have provided close to 9000 sets of new school furniture to close to 200 schools in Armenia and Artsakh ” said Armen Abrahamian, chairman of the board. During the reception two distinguished board members Ms. Anahid Sarian, vice president, and Mrs. Janet Mirzayan, treasurer, were honored for their valuable contributions, long term commitment and volunteer work for ASF, since its inception in May of 2003.

“Both ladies have been pioneers in their work and have achieved a lot for ASF and the Armenian community for a number of years” stated Mr. Abrahamian. “We dedicate this evening to both to celebrate their achievements and honor their work.”

Ara Karapetian, a former board member, in his congratulatory letter to both honorees wrote; “Anahid and Janet are the best examples of Armenian women who know the future of the Armenian nation is with its young generation. They gave so much of their time and energy to facilitate creation of a new generation of better educated young Armenian.”

Present at the reception were close friends and family members for both honorees, as well as past donors and members of several organizations such as Homenetmen Glendale Ararat Chapter, Armenian Relief Society, Iranahye Organization, and Glendale- Ghapan Sistercity Association.

The Armenia School Foundation (ASF USA) is a nonprofit and non-sectarian, 501 (c3) organization, founded in May 2003. ASF USA provides new student and teacher desks and chairs to schools in remote regions of Armenia and Karabagh to enhance the learning environment. 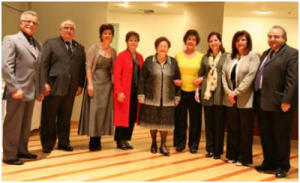